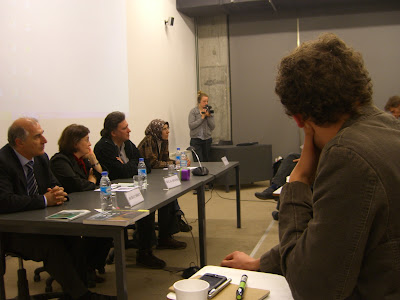 Summing up the Study Tour and Final Comment
Presented at Final Panel at Bilgi University, March 17, 2008

I would like to present my impressions and conclusions in the form of three statements from three perspectives, each one inspired by and dedicated to three of urban development’s main theorists.

Istanbul seems to be aspiring global city status. One should not forget that in Roman and Byzantyne times it had already had this status for a very long time. Constantinople was one of the world’s first and largest global cities.

In the current age of globalization, Istanbul has (re-)entered the competition for global city status. Many of the city’s visible developments, in architecture, urban design, urban regeneration, traffic infrastructure, preservation of monuments etc. reflect these global ambitions.

One handy way of putting this development into perspective is to subject Istanbul to a ‚quick and dirty’ SWOT-analysis. So what are the Strengths, Weaknesses, Opportunities and Threats (SWOTs)?

- international tensions (along Turkey’s borders and with EU)
- Turkey’s tendency for (self-) isolation
- unresolved conflicts inside Turkey
- ...
Opportunities

- commercial hub for the larger region
- potential for becoming one of the world’s most dynamic cities
- ...

- growing segregation
- social unrest (both not despite but because of investment)
- economic stagnation or decline because of unresolved political problems
- ...


International competition is prolonged / transmitted into competition between Istanbul’s districts. Beyoglu, Fatih, Eminönü etc. are rivals for prestige, image, status, and income. They compete for investment and good tax payers, both businesses and private. They all thrive for international standard and international style, and are thus anxious to ‚clean up’ their territories under the label of ‚physical and social renewal’. Whereas physical renewal can in many instances easily be understood as something unavoidable, the notion of social renewal must be questioned. The examples of Süleymanie, Sulukule, Tarlabasi neighbourhoods challenge us to ask ‚Who wins, who loses?’

2 Social Justic and the City

Is the current policy of regeneration in various neighbourhoods of Istanbul more oriented towards consensus or confrontation? Having looked at the examples mentioned above, we got the impression of a neo-liberal approach of development with increasing economic and social differences as a consequence of physical renewal. The erosion of the middle class and the total ignoring of the positive experiences with the Gecekondu style development (spontaneous, self-help, later legalized urbanization) are part of this plan.

During our tours and talks we were astonished to repeatedly hear rhetorics of war and disease when people talked about those neighbourhoods about to be gentrified. ‚Crime’, ‚drugs’, ‚prostitution’, ‚cancer growth’ were the reasons given to explain the urgency of tearing down and rebuilding entire neighbourhoods. As if to underline the seriousness of the situation the entrance to Tarlabasi is dominated by a police station with a police tank parked in front of it. All of this recalls Neil Smith’s notion of ‚Revanchist City’ where the poor are blamed for their poverty.

What is desperately lacking in this type of urban renewal are social / ethical values and a truly democratic process. Whereas it may be true that in urban development ‚you cannot always satisfy 100% of the people’ (a sentence we heard three times in two days), one should be suspicious when it is always the same 10, 20, or 30% who have to pay the price. What happens to those that again and again are being pushed around the city, those that are evicted from their homes and/or insufficiently compensated? How does the city deal with the weakest, those most vulnerable?

The democratic process should be strengthened. Participation, mediation, compensation are just a few of the demands to be put forward. In the observed regeneration processes everyone affected has to know much more of what is actually going on: information, transparency, honesty, a level playground are some of the key issues. Questions must be allowed and answered. All agents must be open to criticisms and alternative proposals. There has to be an open debate over development goals. The financial implications, e.g. a cost-benefit analysis, should be clear to everyone.


3 The Right to the City

What can we contribute to this development as an organization?
First of all, we can serve as watchdog. We can keep our open eyes on the processes that are taking place. We can report what is going on. However, we should be careful with premature judgments. We should be reluctant to present ourselves as ‚referees of last resort’. Secondly, we can provide analysis, ask critical questions, present examples of best practices and suggest alternative plans. And, thirdly, we can learn. Learn for us, learn for the network and then disseminate the knowledge gained on site.

What can we contribute from our local backgrounds?
We can offer experiences from local processes and struggles, what we learned under similar or differing conditions of e.g. global competition, CBD-expansion, gentrification, housing crises in our cities. And how we dealt with these forces and threats. We can tell about and explain forms of action and resistance we applied locally, their failures and their successes, from demonstrations to squats, from publicity work to coalition-building. Many of us have stories to tell about unwanted developments that have been blocked, and successful projects that could be realised thanks to a combination of factors and framework conditions.

We can offer best practices and point to new solutions, we can assist, counsel, advise, help lobbying, and describe alternative organizational approaches to current problems.

We can often re-assure others involved in local struggles that their experience is part of an over-arching struggle for resources, opportunities, chances. That they are not alone. That it is necessary to question and to criticize.

The struggle for the right to the city is not finished. It is something that has to
be demanded again and again. Only by this can we achieve a better and juster city.

There is no change without critique resistance and struggle.

A. How to get to Taksim, to the Büyük Londra Hotel and to Santral Istanbul

B. Registration and meeting the first time